Paul Pankert (19/11/1965, Eupen, Belgium) studied violin at the conservatories of Liège, Düsseldorf and Maastricht. His musical activity has been primarily focused on the performance of contemporary and baroque music for over two decades; he is currently devoting more and more of his time to composition. He played and analysed hundreds of compositions, including numerous first performances, as solo violin in the Dutch contemporary music group Ensemble’88, with whom he was able to explore an equal number of compositional styles. He became artistic director of the ensemble in June 2014.

The eternity of the Garden of Eden is represented here by a canon perpetuum shown, in which a Hosanna by Bosch's contemporary Josquin de Prez is braided. The second part, "The Garden of Earthly Delights", is characterized by a heartbeat wandering through the various instruments and symbolizes the vibrant life. The musical material is also from the Renaissance. The inspiration for the third part, hell, was of course provided by the score present on the bottom of a person crushed by an instrument present in the painting.

Cameron SINCLAIR, The fly (for oboe, percussion and electronics, 8’)

Cameron Sinclair is a Scottish award-winning composer, conductor and performer with a writing output that ranges from orchestral works to chamber, choral, film and electronic music. His music is influenced by Steve Reich and Lutosławski and by his many years as a performer, touring the world with the Philharmonia Orchestra, Chamber Orchestra of Europe and Glyndebourne. He has been fortunate to work with many inspirational musicians including Claudio Abbado, Esa-Pekka Salonen, Dame Evelyn Glennie and Gustavo Dudamel.

Insects play an important role in human imagination and mythology. Each culture has its own repertoire of insect legends and, although these are more prevalent in indigenous or traditional cultures than among industrialised societies, they often share themes that bridge the cultural and temporal divide.

Everyone in the West knows the song about an old lady who swallowed a fly (perhaps she’ll die) but in Japan, twelve species of musical insects with evocative names such as Small Bell, Bamboo Grove, or Grass Lark are sold as good luck charms. Usually however, the associations are negative ones as in Chile, where the praying mantis is known as the Devil's Horse, or in Madagascar, where people are frightened by moths, believing them to be ghosts. My favourite is the legend that the Lantern Beetle's sting will kill you unless you make love within the next 24 hours - a perfect excuse if one were needed - even though this insect has no trace of a stinger…

Western literature has tended to play on people’s phobias about insects and exploited their association with spreading pestilence. Sartre’s Les Mouches, a three-act play telling the same story as Sophocles' Electra, introduces flies as a metaphor for ever-present decay and death, but it is Kafka’s tale The Metamorphosis, with its powerful use of the insect form as a metaphor for the alienation and loss of self that Gregor Samsa feels as he transforms into a fly, which resonates most strongly. This piece follows the first realisation of that transformation, the electronics serving to amplify and distort the timbre of the oboe, like seeing a familiar object under a microscope.

Rutger Muller (Maastricht, Netherlands / Born: 1984, Geleen, Netherlands) is an electro-acoustic composer who uses technology to explore sound and culture from a spectral (timbral) perspective. Besides composing contemporary music (alone or with classical instrumentalists), he makes chiptune music and is active in digital design and translation. He reviewed modern classical music for Bachtrack, organised concert series The Instrument Room, and collaborated with game designers, animators, fashion designers, choreographers, dancers, among others. Muller holds a BA in Multimedia Design (Avans University of Applied Sciences, Breda, 2008), and a BA + MA in Adaptive Sound Design and Composition (Utrecht University of the Arts, 2012)

Dutch ‘avant pop’ composer JacobTV (Jacob ter Veldhuis, 1951) started as a rock musician and studied composition and electronic music with Luctor Ponse and Willem Frederik Bon at the Groningen Conservatoire. He received the Composition Prize of the Netherlands in 1980 and became a full-time composer, who soon made a name for himself with melodious compositions, straight from the heart and with great effect.
The press called him the ‘Jeff Koons of new music’ and his ‘coming-out’ as a composer of ultra-tonal music reached a climax with the video Oratorio Paradiso based on Dante’s Divina Commedia.

In the US they call him JacobTV. Sounds cool, just like his music, packed with slick sounds and quirky news samples. "I pepper my music with sugar," he says. You cannot accuse him of complex music, but some of his pieces are so intense, that people get freaked out by it. Or simply blown away.

Composed in 2003, commissioned by the Dutch FPA, Jesus is Coming was inspired by the 9-11 trauma and the role of religion today and what humans do or don’t in the name of God. Is Jesus really coming? It’s about time… The composition is based on sound bites from the streets of New York, like a small Salvation Army choir and an angry street evangelist on Times Square. The groove is based on baby talk by 2 toddlers: 18 months old Welmoed and 2-year-old Amber.

Jesus is Coming was originally scored for bass recorder quartet but soon after arranged for sax quartet, trombone quartet, brass quartet, reed quintet, a combination of violin, viola, cello, Bb clarinet and trombone and for flute orchestra. A wind quintet version is in preparation.

Piece for woodwind quintet and percussion – to be determined

Like Charon on his boat, immortal commuter between the world of the living and that of the spirits, STYX wants to be the link between the current audience and that of tomorrow: riding the wave of new technologies while preserving the repertoire dear to our hearts of musician by combining our accumulated experience within a new structure.

Around a fixed core (woodwind quintet) will gravitate a collective, allowing the ensemble to interpret programs with variable geometry by making a place of choice for the interdisciplinary and the decompartmentalization of the genres of so-called “classic” type concerts.

Aware of the existence of many ensembles already present in the field of “new music”, we nevertheless believe it appropriate to create an additional project in Brussels, proud of the presence of musicians from the three communities of Belgium. 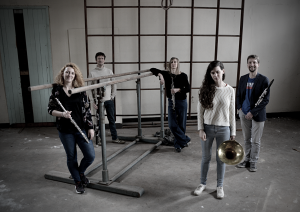 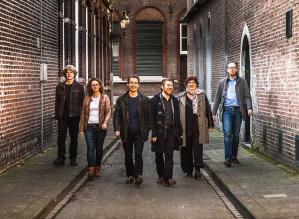